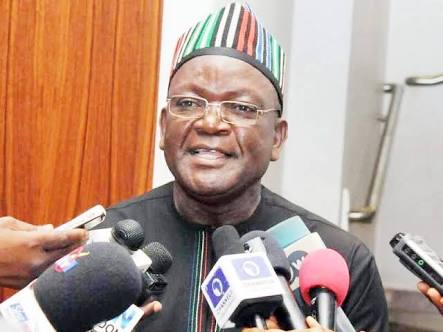 Benue State Governor, Samuel Ortom on Wednesday, dispelled news of denouncing his position as the chairman PDP zoning committee ahead of the 2023 elections.

Ortom maintained his resolve to complete the assignment without blemish saying, “I have no reason to resign as the chairman of the Peoples Democratic Party (PDP) Zoning Committee ahead of the 2023 general elections.”

The Governor was reacting to news credited to the Arewa Youths Consultative Forum (AYCF) led by Yerima Shettima who had accused governor Ortom of compromising his position for receiving his Rivers state counterpart, Governor Nyesom Wike in Makurdi, the Benue State capital.

Wike was in Makurdi on Sunday, March 28 where he declared his presidential ambition to contest the 2023 presidential elections.

Shetima had alleged that the N200million naira donated by Governor Wike to help rebuild the burnt Katsina-Ala and High-Level Makurdi markets in Benue state was to compromise Ortom.

The Governor started, “I am shocked that some people can be insensitive to the plights of others who are distressed. What my brother Governor Wike did was to identify with our pains and offered succour to the best of his ability.”

He pointed out that he is only “first among equals and not a dictator to impose any idea on members of the PDP zoning committee” who he said “are distinguished Nigerians who have excelled in their careers in life. So for anyone or group to come out to suggest that one man will impose his will on the other 36 members is insulting.”

“Members of this committee will work out the best for this country and Nigeria will be better for the outcome of our assignment,” he stated.

On allegations that he was given money to influence him, Governor Ortom declared;  “This is not the first time Wike will donate money to Benue State. Wike has been one of the people in this country who have contributed to the upkeep of the more than 1.5 million Benue people living in IDPs.”

He went on, “Wike has also donated money to other states including some in the north. That did not make news to these so-called Arewa Youths. Besides, he is not the first presidential aspirant to come to Benue to identify with our plight.”

Governor Ortom continued, “Former Vice President Atiku Abubakar was in Benue to consult with us a couple of weeks ago and he donated the sum of N50million to the IDPs. Then, Shettima and his Arewa youths did not see anything wrong with that and they did not ask me to resign.

“For the avoidance of doubt, we, in Benue state have no hatred for any one of a group of people. We will receive and accord due respect to any Presidential aspirant who comes to consult us over his or her political ambition,” the governor maintained.

“So it is hypocritical for this faceless group to twist this narrative of Wike’s visit is unfair and uncharitable. We must be open to all so that we get the best out of many that have come out to rescue this country from the misery the APC government has put us into,” the governor maintained.

Ortom reiterated that he will carry out the assignment diligently, honestly and will be guided by a good sense of justice and fairness to all.